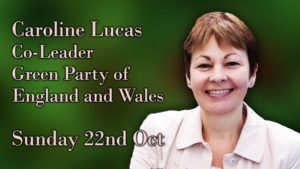 Caroline Lucas is our guest speaker on 22nd October.

Caroline is known as a campaigner and writer on green economics, localisation, alternatives to globalisation, trade justice, and animal welfare. She has worked with non-governmental organisations and think-tanks, including the Royal Society for the Prevention of Cruelty to Animals. the Campaign for Nuclear Disarmament, and Oxfam.