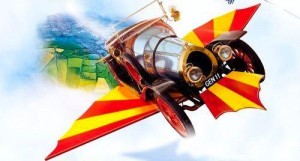 Did you ever see the film Chitty Chitty Bang Bang? You may not be old enough to have seen it when it first came out in 1968, but I was.I remember my father taking me to an old fashioned cinema, enormous, (or at least it was enormous to a 7 year old boy), and we sat in the balcony. I loved it – and when it got to the part of the film where Chitty Chitty Bang Bang went over the cliff edge my heart jumped into my throat. …..and then the curtains closed and there was an intermission! A medley of songs from the film were played as we ate ice cream and waited with anticipation for the film to re-start.

The great red velvet curtains swung open and the film started to roll. Not quite where it left off, but a minute or so before the cliff edge scene. The car went over the edge and this time there was no reprieve, I held my breath as it hurtled down towards the rocks and crashing waves when suddenly – wings sprand from the chassis and Chitty Chitty Bang Bang flew the family to safety. A flying car. Wow!

The Easter story is like that for me. Jesus, hurtling over the edge of the cliff. You see him go over the edge, doomed, the earth stands still, and then you wait. It’s not until Easter Sunday when the women go to the tomb do we find out that he has risen. Jesus, risen from the dead!

Now I’d not recommend that you drive over a cliff to see if your car will sprout wings; I’m pretty certain it won’t. But whenever we face the cliff edge in life, and we often do, we can remember Jesus risen. For God nothing is impossible and even when we think it’s the end we find that in Jesus it’s a new beginning.

I hope this Easter you have the urge to hold your breath. You’ll see Jesus go to the cross, die upon the cross, be buried in the tomb. Of course we know what happens, just like watching a favorite old movie we know the story by heart. But every time we engage with it we feel the anticipation, the story about to twist and change and reveal the Will of God. And when it happens our heart leaps and we feel the joy and relief – God breaking through to be with us again, save us from the abyss.