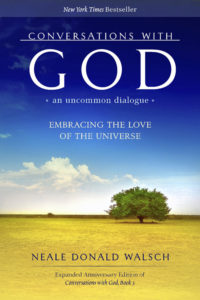 This month’s book club offering is Conversations With God by Neale Donald Walsch. There was a film out a few years ago of the same name that gave the background to the author’s life and the events that brought him to write the book. He said that he ‘had a conversation with God about the meaning of life and then wrote it all down. I remember reading it when it first came out and it was a revelation for me.

Some years later and it seems so dated! Along with How to Win friends and influence people and even many of the concepts in our second book F*”K It I find that I have moved on. And yet when I read Conversations With God for the very first time it really was a revelation. What changed? How come God could go from sounding clever and wise to, well, cheesy?

Biblical scholars call this phenomenon the Sitz im Leben, which is roughly translated from the German as Setting in Life. It means that in order to understand texts that are thousands of years old, or indeed twenty years old, we need a little information about the context in which it was written. If we didn’t know that Jerusalem was a city occupied by a foreign power we’d have read the gospels very differently. If we didn’t know that Paul was Pharisee we may have read his letters through a completely unrelated lens. If we didn’t know that Jerusalem was destroyed by Rome in 70ce, or that a Volcano took out Pompei in 79ce, then we’d see John’s Revelation – (written soon afterwards) – in a different light. We wouldn’t have understood how desperate Israel was for a political Messiah, or how naturally hot headed and Zealous Paul was, or even how terrifying it was for a lone Christian prophet on a small Greek island; Patmos.

I believe that God is talking to us today, with a voice that is true for today and relevant for today, just as God always has done for every time and every place. We can find those words in today’s writings, today’s conversations, today’s sermons, todays revelations. Relevant for today we can often make the mistake of thinking that they are the truth for all times and places, instead of the truth for this time and this place. As the United Church of Christ are fond of saying; God is still speaking! The question is, as we wrestle with the words spoken in the past, are we also listening for what God is saying today?