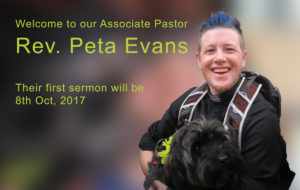 The Village MCC is excited to announce that Rev. Peta Evans has joined us as Associate Pastor. They will give their first sermon at The Village at 6 pm on Sunday 8th October.

Rev. Peta is an ordained minister, a non-binary trans-man, and in their secular life, a care-worker and a tailor.

Rev. Peta began their MCC journey in this very city, a member of an MCC in Brighton from 2003 to 2010 when they left to train as clergy intern in North London. Peta’s training also took them to serve in MCC Newcastle, and a URC church in London and they became particularly involved in supporting LGBT+ asylum-seekers.

Rev. Peta said, “Returning to Brighton, I am excited to serve again in the community which first welcomed me and supported me in both my ministry journey and my gender transition. I would love to see the sincere passion and integrity of The Village MCC reach out even more widely to people of all ages, gender identities and walks of life.

I am also enthusiastic about reclaiming the Bible from those who have tried to make it a weapon against those who are different, and I’m starting a group for Trans people to do just that, ReTranslation, to look at the text for themselves without past interpretations getting in the way. I have a love for Celtic spirituality, which weaves together the practical and the spiritual, finding depth and delight in all things, no matter how mundane, and for creative expressions of spirituality, which I hope to share with The Village in the coming months.”

Rev. Michael Hydes, Senior Pastor of The Village MCC said, “I’m looking forward to working with Rev. Peta. Their rootedness in Celtic Christianity and experience working in the Trans communities are just two of the many gifts they bring to their work. I know we’ll all be enriched by their participation in our church life and leadership within our community of faith.”

Please let us know you’re coming by signing up at our facebook event.